Manual therapy + movement for the masses

What do you think of when a client or patient says they have “chronic hamstring pain”? In our office, we are “neurocentric”, so we think about the potentially involved neurology first. Then we begin an assessment to rule in or out various neurology of different “caliber”. Only after doing this do we explore the hamstring muscles and tendons. We consider what movements cause the pain and see if therapy targeting any sensitized neuro we find helps reduce or eliminate the pain with movement. Here’s a clinical pearl we have found regarding the posterior femoral cutaneous nerve (PFCN) and how it can be involved in some of these cases. 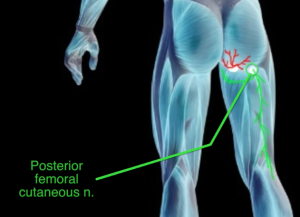 When considering  location, depth and actual size of cutaneous nerves, we have found surgical anatomy literature to be a valuable resource. This area of research gives the reader an appreciation of how superficial, how large and what kind of variability we see in branching patterns of cutaneous nerves such as the PFCN. The PFCN is a purely sensory branch from the S1-3 nerve roots that exits the sciatic foramen, generally below the piriformis. The perineal branch (PBPFCN) innervates the lateral perineum, proximal medial thigh, posterolateral aspect of the scrotum/labium majus, and a portion of the penis/clitoris. The inferior cluneal branches provide innervation to the inferior buttock area, and the descending cutaneous portion innervates the posterior aspect of the thigh and the popliteal area. (1) The descending branches of the PFCN travels down the posterior thigh in the superficial fascia directly above the long head of the biceps femoris to the popliteal fossa. This is important to consider because the biceps femoris is the most injured hamstring during high speed running (2-3)

Mechanical Interface and a “Neurocentric Approach”

“Mechanical interface” for our purposes references the neurodynamic exploration and literature of Alf Brieg, MD; David Butler, PT; and especially Michael Shacklock, PT. Shacklock’s book, Clinical Neurodynamics and his continuing education courses are invaluable resources for clinicians. The mechanical interface is anything that resides next to the nervous system, such as tendon, muscle, bone, intervertebral discs, ligaments, fascia and blood vessels. 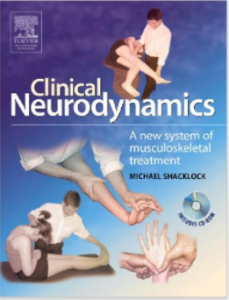 Additionally we may turn our attention to the superficial fascia, retinaculum cutis (skin ligaments), and possibly the fat lobules in this region that can create a theoretical mechanical interface dysfunction with cutaneous nerves. An invaluable resource to learn more about his relatively unexplored anatomical compartment is Functional Atlas of the Human Fascial System by Carla Stecco. 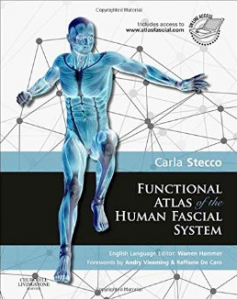 We refer to the DTM process as neurocentric in that we consider the involvement of not only cutaneous nerves, but also peripheral nerves and nerve roots. The flow in the DTM process investigates first the nerve roots, then the peripheral nerves and finally the cutaneous neuro when a sensitized neural track is identified. Let’s take a hypothetical clinical scenario to illustrate the process with the PFCN.

Let’s say a college hurdler presents with chronic tightness in the left hamstring when they swing that leg over the hurdle. They have history of prior biceps femoris strain 2 years earlier and a locked low back several years prior to that after a lifting incident in the weight room.  They arrive at your office having previously been to their physician who ordered MRI of the lumbar spine demonstrating a mild left lateral disc protrusion at L5-S1 with no apparent stenosis of the neural foramina. An MDT certified physical therapist suggested endrange loading into lumbar extension theorizing a derangement syndrome of the lumbar region. That treatment helped somewhat but the results did not seem to persist.

On examination, standing toe touch is limited with a subtle flexion of the left knee noted. By asking the patient to flex the left knee a bit more, perhaps 15-20 degrees, they are then able to demonstrate much greater ROM on the toe touch. A seated slump and SLR reproduce the sensation of hamstring tightness, show asymmetry of tension with L leg ROM < R, and discrimination movements suggesting the “hamstring” symptoms have a neurogenic component. ( author’s note, this screening process is best described in the courses taught by Michael Shacklock which you can find at this link) Prone resisted knee flexion reproduces the symptoms again in the left hamstring. Palpation of the left proximal hamstring reveals tenderness in the tendon area near the site of the old hamstring strain. Skin rolling over the posterior thigh reveals discrete moderate tenderness in a line along the posterior thigh which is much more tender that the right leg.

So reviewing your findings, the history and the physical suggest both possible hamstring and neural involvement. Where to begin? In the DTM process we use a neurocentric approach and attempt to rule neural structures out first. We might have the patient return to standing, attempt the toe touch a few more times to see if it continues to reproduce the chief complaint (subjective) and remain limited (objective). We might measure the fingertip-floor distance and begin our clinical audit process (CAP).

Beginning at the spine, we perform 2X10reps of prone press ups and repeat the toe touch. We find minimal improvement in subjective and objective findings after the prone press ups.

We might then consider the peripheral neurology and utilize supine sciatic neuromobilizations. After 20 reps, there is a 50% improvement in subjective and objective toe touch findings.

We then approach the superficial neural compartment remembering the course of the PFCN. As the athlete attempts forward bending, we lightly pinch and lift the skin over the course of the PFCN. At the medial aspect of the distal biceps, we see clearly that the toe touch normalizes and the patient reports total relief of pain. We have them repeat the toe touch several times while traction is maintained to the skin over the biceps.

Given the deeper coursing of the PFCN in the intramuscular septum, we might tug vigorously over those tissues while the patient continues to perform the normalized toe touch. We audit the effectiveness by repeating the toe touch absent the DTM-ing and find that it is now normal. For homework, the patient might receive supine neuromobilizations combined with self-applied DTM over the hamstring. Optionally, a standing variation using toe touch could be used, or perhaps leg swings with a silicon massage cup applied over the target area on the hamstring.

This hypothetical patient is a conglomeration of several similar cases we have seen in our office over the past year. In those cases, we still have work to do to make sure that the lifting patterns of the athlete don’t predispose them to re-injury of the lumbar disc and continue the sensitization of the neural tract. We may also have manual therapy needs around any scarring near the previous hamstring strain. We would typically have the patient repeat the DTM process prior to every training session and several times daily initially to help reduce sensitivity of the neurology.

In conclusion, history and physical exam findings may be mixed between different neuro and concomitant muscle/tendon/bone injury, but the thoughtful inquiry into the various caliber neurology and empirical testing wins the day in N=1. In future posts we will explore the theory behind the initially transient benefits of the DTM process and why repetition in the absence of pain may have cumulative benefits.

These Unbelievably Low-Calorie Massage Cups Will Make You a Better Person!

The Many "Roads to Rome" With Dr. Marc Heller

Leave a reply Click here to cancel the reply